BROUGHT TO YOU BY

The New Mexico Jazz Festival is a collaborative project of The Outpost Performance Space and The Lensic Performing Arts Center both 501(c)(3) non-profit organizations.

Established in 1988, The Outpost Performance Space is Albuquerque’s non-profit, member-supported, community-based Performing Arts Center. While presenting numerous concerts in larger venues, including those of the New Mexico Jazz Festival each July,
Outpost’s home is at The Space— an intimate venue located at 210 Yale Blvd SE just down the street from the University of New Mexico. Outpost presents more than 100 concerts each year— jazz, experimental, folk & roots, spoken word, teen
performance nights and much more— plus classes for youth and adults. Outpost also host visual arts exhibits in the Inpost Artspace. The Outpost Performance Space is unique— intimate and elegant— and we invite you to come see us. For more information
go to www.outpostspace.org

The Lensic Performing Arts Center is Santa Fe’s premier year-round performing arts center: a state-of-the art venue for theater, music, dance, film, lectures, community events and family programming set in a historic theater in the heart of the City
Different. The Lensic offers over 250 performances a year, technical apprenticeships in the performing arts, and free performances to over 20,000 local school children a year. The “Lensic Presents Series” reaches out beyond the traditional performing
arts to bring new and original works to Santa Fe. “Under Construction” an original, ongoing series showcases theater pieces under development. “Big Screen Classics” honors The Lensic’s origins as a movie house by screening treasured movies from the
earliest silent films to the latest in high definition satellite broadcasting. “World Music Series” brings international musicians and artists from the Balkans and Bhutan to Egypt, Ireland, Ethiopia and Japan to The Lensic stage. For more information
go to www.lensic.org

Santa Fe Bandstand is a free summer festival on the Santa Fe Plaza Stage produced by Outside In, in collaboration with the City of Santa Fe and featuring the best music of this region including Latin, Blues, Rock, R&B, Native, World beat,
Country, Jazz, Swing, Reggae, Folk, Zydeco, Electronic, Hip Hop, Spoken Word, Classical, Dance etc. Santa Fe Bandstand 2008 will feature up to 80 performances from July 7th to August 21st. Monday through Thursday evenings 6 to 8:30 pm and every
Tuesday and Thursday afternoon from noon to 12:30pm. Outside In is a nonprofit, community-based group established in the spring of 1995, to bring free, live performances, presentations and workshops to people confined to shelters, residential
treatment facilities, nursing homes, correctional facilities, and any other institutions or human services programs where people would otherwise not have access to the arts. The Youth with Promise program presents free weekly guitar, dance, &
visual arts workshops to juvenile offenders in detention and on probation, to at-risk youth in shelters and residential treatment programs and other underserved youth in the community. For more information about Santa Fe Bandstand and Outside/In go
to
www.outsideinproductions.org/santafebandstand

Route 66 Summerfest
Central Ave. and side streets between Girard & Washington 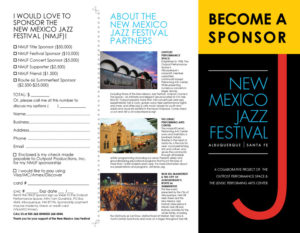 Founded in 2006, the New Mexico Jazz Festival followed on the work of the Open Arts Foundation’s Santa Fe Jazz and International Music Festival (2000-2005) which produced hundreds of concerts and brought an unprecedented wealth of high quality jazz
to Santa Fe. In 2006, our inaugural effort presented McCoy Tyner, Branford Marsalis, Jazz at Lincoln Center’s Afro Latin Jazz Orchestra, the Newport Jazz Allstars, and more. In 2007 we expanded our efforts and presented more concerts in both cities
including performances by the legendary Sonny Rollins in Albuquerque and Santa Fe. We also inaugurated a partnership with the City of Albuquerque’s Summerfest by offering 5 hours of music on Civic Plaza— an evening which was free and open to the
public and which was capped by a performance by Toumani Diabaté’s Symmetric Orchestra. In 2010 that evening on Civic Plaza moved to Route 66 in Nob Hill and event which features 120 performers on 3 stages and draws 60,000 people. The New Mexico Jazz
Festival continues to grow and you can see the line-ups for all the years listed below.

As always, we will present New Mexico Jazz Festival events throughout the regular season, in partnership with the Lensic Performing Arts Center.

The fourth in a series of New Mexico Jazz Festival events at the Lensic this sprin ...