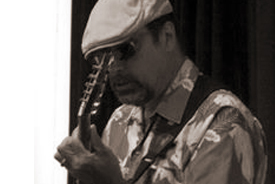 Guitarist Dimian DiSanti has been a fixture in the New Mexico Music scene for over 40 years. His unique blend of musical genres such as Blues, Jazz and World Beat styles have made him a sought after player for live club performance, theater, project musical direction and studio work across the region. His latest recording, My Big Back Yard, will be available in the fall 2020. 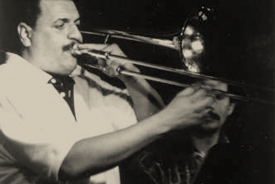 Renowned trombonist, percussionist (congas, bongos, timbales, batá drums, as well as drumset and hand percussion), singer, composer, arranger and bandleader César Bauvallet is most widely known as the leader of Albuquerque’s most popular 9-piece Salsa band, Son Como Son as well as Tradiciones. Originally from Cuba, César graduated from the renowned Amadeo Roldán Conservatory in Havana in 1981. He has been a music educator and professional performer for more than 30 years. We are proud to welcome him to our Faculty in the Spring of 2013. 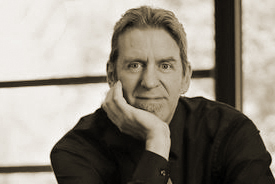 New York pianist Jim Ahrend has called Albuquerque home since 2008. His rapid absorption into the local jazz scene has included playing with local legends like Bobby Shew, Mike Anthony, Glenn Kostur, Doug Lawrence, Tony Lujan, and many others. An alumnus of New England Conservatory, Ahrend is the organist at Monte Vista Church in Nob Hill; music coordinator for the weekly jazz vespers series, “Faith, Hope and Jazz”; and is in his fourth year as keyboardist for the Albuquerque Jazz Orchestra. From 2002-2007 he appeared regularly onstage and on national TV (HSN) with guitarist Esteban. A frequent performer at Outpost, Ahrend says he eagerly anticipates expanding his role as at Outpost as an instructor.

Tenor saxophonist Kanoa Kaluhiwa was born in Hawaii, but spent his formative years in Las Cruces, New Mexico. While still a high school student, Kanoa played professionally and was awarded two scholarships to the Eastman School of Music summer Sessions in New York. Upon graduation from high school, he was awarded a scholarship to the Berklee School of Music in Boston where he spent two years studying jazz performance and music theory under George Garzone and Joe Viola among others. He is currently teaching private lessons at Baums Music. One of New Mexico’s most sought after saxophonists, he currently performs every Thursday night with the Pat Malone Group at La Posada in Santa Fe. 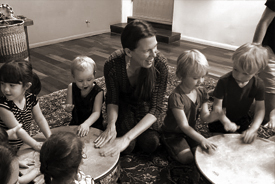 Originally from Québec, Canada, Maryse Lapierre is a French tutor, singer-accordionist and harmonium player, as well as the new Director of the Harmonic Kids Albuquerque center.  Along with singer-songwriter-guitarist-violist (and Outpost Communications/Sponsorship Director) Alicia Ultan, Maryse is half of the award winning Albuquerque-based musical duo Bébé La La. Maryse loves working with children, especially around music. She is a registered Music Together teacher and has been an active teacher since 2016.

One of New Mexico’s most versatile bassists, Rob “Milo” Jaramillo plays everything from Latin Jazz to down home Blues. One third of the Native American Jazz Trio, “Red, White & Red,” he is the “go-to” bass player in Albuquerque and Santa Fe and has performed with some of the state’s finest bands, including Hillary Smith & Hip Pocket, Bert Dalton’s Brazil Project, Michael Anthony and The One Spiritual Center Band, as well as with visiting touring artists like flutist Ali Ryerson.

Paul Gonzales began his musical career in 1984 as the Jazz trumpet soloist with the Army Band of New England. Since then he has worked in the jazz, salsa, and pop fields, and hosted the Monday Jazz Show on KUNM for 13 years. Paul taught youth & adult jazz combos at the Outpost Performance Space and was an adjunct trumpet professor at Northern New Mexico College.

Born and raised in Santiago, Dominican Republic, drummer Arnaldo Acosta, has been in Albuquerque for 25 years now, playing with a wide variety of groups in a multitude of genres. He has toured internationally and played at festivals with the likes of Al Dimeola as well as with several Dominican groups.  Currently a member of Fat City, he also plays timbales with Ivon Ulibarri and Cafe Mocha, Ben Michael’s jazz jam trio, and the Center for Spiritual Living band.

Born in Louisiana and raised in Albuquerque, saxophonist Doug Lawrence has performed and recorded with many iconic artists such as Ella Fitzgerald, Sarah Vaughan, Frank Sinatra, Aretha Franklin, Tony Bennett, Ray Charles, Dizzy Gillespie, The Count Basie Orchestra and others throughout his long and distinguished career.

For more information on the Master Class CLICK HERE.